October is Don’t Be a Bully Month

The month of October is full of haunts and horror movies, but there’s something truly scary that we stand up against all October: bullying. 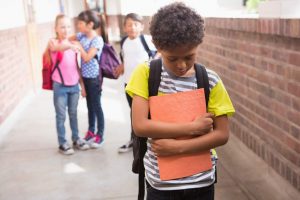 Though your dictionary may simply define bullying as seeking to do harm or intimidate a vulnerable subject, there’s far more to the story than that. The National Centre Against Bullying takes the definition deeper, putting the aggressive act into context:

“Bullying is an ongoing and deliberate misuse of power in relationships through repeated verbal, physical and/or social behaviour that intends to cause physical, social and/or psychological harm. It can involve an individual or a group misusing their power, or perceived power, over one or more persons who feel unable to stop it from happening.”

– The National Centre Against Bullying

A notable part of this definition is that bullying impacts people who feel unable to stop it from happening, highlighting how powerless and out of control bullying can make kids feel. The negative treatment can be relentless, and without adult intervention, it can seem like an unavoidable aspect of the school day.

Why We Need a Whole Month Dedicated to Bullying Prevention

Some folks have an outdated, inaccurate sentiment around bullying: that it’s a right of passage and just part of growing up. It’s a dangerous ideology that downplays the severity of bullying and puts kids at continued risk of being tormented.

The reality is that bullying is everywhere and is a significant cause for concern.

That’s why we spend October talking about it openly: to prevent it from happening to more kids.

About 20% of students ages 12-18 experience bullying nationwide, according to StopBullying.gov. That’s one in five students experiencing verbal, physical, psychological, or social harm at some point during adolescence.

Not only does bullying present a significant distraction from learning, but it can lead to school avoidance and a loss of interest in academic achievement altogether.

And the effects are dire for youth who experience sustained or severe bullying, as the torment can exacerbate feelings of isolation, rejection, and exclusion that lead to suicide-related behaviors. Studies have shown that students who report involvement with bullying behavior are likely to report high levels of suicide-related behavior. These behaviors include suicidal ideation, attempts on one’s own life, and death by suicide.

Since bullying can follow kids beyond school grounds, after school hours, and into other aspects of their lives, the stakes are high for educators seeking to enact meaningful change in their classrooms and after school programs. 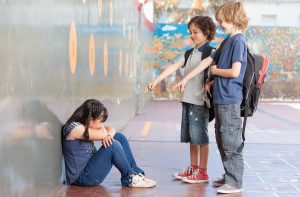 Who is Most at Risk of Being Bullied?

Knowing who is at the greatest risk of being bullied can help us all build environments that prevent it. Here’s one thing we know: kids who are seen as “different” are often likely targets for bullying.

For example, we know that students with disabilities are at an increased risk (they’re two to three times more likely) of being bullied. While disability can present in a number of ways, any notion of disability can lead to the perception that a student is different from their peers. From mobility issues to social and learning difficulties, the expression of a child’s disability may impact their interactions with other students.

And the effects on these students are deep.

“Perhaps the most profound area that bullying has an effect on students with disabilities is on their self-concept, or how they see, understand and think about themselves. Depending on their upbringing and the specific nature of their disabilities, children may not see themselves as different until they face harsh words or actions from a bully. Bullying can make children with disabilities feel weak, disliked, and inferior to their peers. Suddenly, they may see themselves as disabled.”

– Effects of Bullying on Children with Disabilities, Clio Stearns

Changes to self-concept can create anxieties around school, education, and social involvement that deter kids with disabilities from pursuing academic achievement or social validation. Students may withdraw from their peers. Yet we also know that isolation from other students increases the risk of bullying victimization and feelings of anxiety, difference, or inferiority. The result is a terrible cycle.

And returning to our definition of bullying, children with disabilities may feel they are unable to stop it from happening.

Kids with disabilities may also be at risk for bullying based on other factors or minorities that they belong to. There are several additional othering behaviors and traits that can make youth vulnerable to bullying, including:

Not all kids presenting these risk factors will experience bullying. However, taking proactive measures to ensure our classrooms and programs foster inclusion for these students can reduce their likelihood of being bullied.

How to Prevent Bullying in Your Program

We all have a part to play in preventing bullying. Students, teachers, program leaders, and administrators alike are instrumental in preventing and addressing negative interactions between the kids we supervise. And there are simple actions we can take to make a strong impact:

Since most bullying is rooted in an “us vs. them” mentality, we can preempt the onset of bullying behavior with an accepting, inclusive environment. When kids understand the basics of inclusion and understand how to celebrate each other’s differences, they won’t see those differences as causes for isolation.

Show Them What to Do (and What NOT to Do)

Life’s lessons are learned in more than just lectures and worksheets. Modeling positive behavior is an excellent way to set the tone for your program. Create an inclusive classroom that puts acceptance at the forefront of every activity.

Teach kids what bullying looks like – and that it isn’t something they need to tolerate. By informing kids that this sort of behavior is wrong or inappropriate, they will feel more empowered to speak up about it or speak out against it. Encourage students to tell a teacher, counselor, or other trusted adult about what’s happening.

How we address bullying can define our classroom culture. But if you aren’t sure what constitutes bully behavior, how to intervene safely, or what to do to prevent bullying, the problem can increase beyond your control.

Dive deeper into what bullying means and how to create a culture of acceptance that stops bullies in their tracks. Our Addressing Bullying course teaches you exactly that, plus how to respond to bullying and how you can support youth in becoming effective bystanders.

You’ll graduate from the course with a better understanding of what causes – and can stop – bullying.

Posted in Imagining Inclusion, Inclusion Tips, Make a difference
← A Better Way to Back to School Part 3: 5 Inclusion Ideas for Rainy Day Recess The Most Common Learning Disabilities: Part 1; How to Identify Them & How to Help →