Growing up, the only exposure I had to disabilities was through face-to-face conversations and interactions through school- and community-based programs. It felt as though disability culture was shunned from the media. As we have been reading more and more about models with disabilities, dolls with disabilities, and characters in TV shows for adult and child audiences, I have never felt so hopeful and excited to see what this new level of exposure and understanding will do for our society. 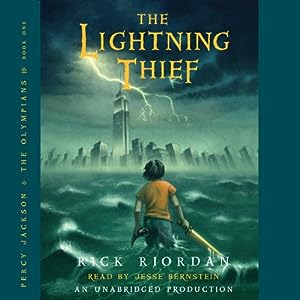 At the school where I teach, I lead a club titled “Books to Movies,” where we read a book from cover to cover, then watch its companion movie. We have read and watched Harry Potter, Holes, and we most recently read The Lightning Thief, by Rick Riordan– the first book in the Percy Jackson series. I had never read any books in the series, but I had heard that they are unforgettable. I have to say that I have not been disappointed.

Percy is a twelve-year-old boy who has had difficulty in school. He feels like his teachers dislike him and want to see him fail. Percy has ADHD and dyslexia, and he often feels frustrated about these disabilities and their effects on his life in and out of school.

The Percy Jackson books sell like hotcakes off the shelves– teenagers LOVE them! And I love that kids get access to characters with learning differences while reading. My favorite part about the way that Rick Riordan writes about Percy’s disabilities is that he presents them as superpowers. When we later find out that Percy is a “demigod” (or someone who has one God parent and one mortal parent), his friends explain to him that his disabilities actually set him up for more success, make him more special.

For example, though Percy has a label of “dyslexia” and struggles to read while growing up, it is later explained to him that demigods with dyslexia are actually people who are “hard-wired” to be able to read in a different way– in Percy’s case, he is meant to read Greek, since is half-Greek god. Percy may have difficulty with understanding English, but when Greek is visible, Percy is more than capable of reading and understanding it (a shocking feat, in his book).

I had very little access to opportunities to learn about disabilities at all as a child. As more and more disability-related materials become available to students, especially those that frame disabilities in such a positive light, I am eager to see inclusive attitudes blossom into inclusive leaders who will reshape our society.

Kids Included Together (KIT) is a non-profit located in San Diego, CA and Washington, DC. We help make the world a more inclusive place by providing live and online training to people who work with kids. We teach strategies, accommodations and best practices to include kids with and without disabilities in before & after school programs. Inclusive environments create stronger communities. Learn more about our work at www.KITonline.org.
Posted in Experiencing Inclusion and tagged accessibility, disability, disability awareness, disability training, disabled, dyslexia, education, inclusion, inclusion training, non-profit, percy jackson, professional development, recreational program, social impact, social sector, special needs, training
← The Day When Even the Advocate Was Quick to JudgeThankful for Inclusion →