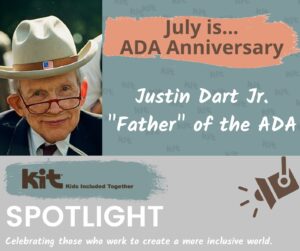 Every month we celebrate a different community and the contributions of one member to the work of creating a more inclusive world. July is a celebration of the 31st anniversary of the passing of the ADA, The Americans With Disabilities Act.

31 years ago, back in 1990, Senator Harkin from Iowa worked to draft the Americans with Disabilities Act. Truly a historic event for all Americans! But, do you know the history behind the ADA?  Justin Dart, Jr. who has been called the “Father” of the ADA, along with his wife, Yoshiko, played a significant and little-known part in bringing it all together.

Justin Dart, Jr. born in 1930 has a story definitely worth telling. Due to his concerning behaviors, Justin attended seven different high schools and described himself as a “super-loser.”  He eventually dropped out.  In 1948, he contracted polio and was given three days to live. He survived and used a wheelchair for the remainder of his life. He used his new-found love of life as an incentive to earn a bachelors and master’s degree, in business and became the president of Tupperware Japan. Justin empowered women and people with disabilities to promote social change, until he was told to stop promoting women in executive positions and to stop his disability campaign.

He and his wife returned to the United States where in the early 1980’s he was a member, and eventually chair of the Texas Governor’s Committee for Persons with Disabilities. Justin and Yoshiko used their own money to, twice, travel around the USA talking to people with disabilities and gathering their stories to help craft the Americans with Disabilities Act. Their intent was to take these stories of hardship and injustices to address discrimination. 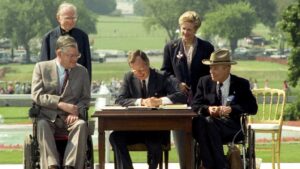 On July 26, 1990, the Dart’s hard work and dedication paid off when President George H.W. Bush signed into law, the American’s with Disabilities Act. During the signing, with Justin next to him, President Bush said,

“let the shameful wall of exclusion finally come tumbling down.”

If you’d like to learn more about Justin and his amazing story, you can watch an interview with him from “The Disability Leadership Series” conducted by Disability Rights Education & Defense Fund (DREDF) on YouTube by clicking here.