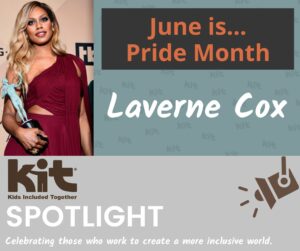 Every month we celebrate a different community and the contributions of one member to the work of creating a more inclusive world. June is Pride Month and KIT Education & Training Specialist, Melissa Beck (MSEd, CTRS), shines the KIT Spotlight brightly on Laverne Cox. Laverne Cox is an American actress, writer, producer, speaker, and LGBTQ advocate who rose to prominence with her role as Sophia Burset on the Netflix series Orange Is the New Black. 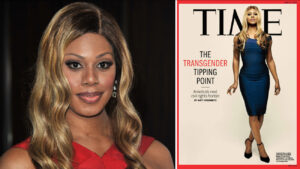 “My life changed when I realized I deserve to be seen, to dream, to be fully included, always striving to bring my full humanity.” ~ Laverne Cox

I first saw Laverne Cox in an episode of Law & Order: SVU. And from then on, it seems as though I’ve seen her everywhere! And maybe I have… She has broken barriers in her roles, served as a role model for youth, and truly a trailblazer in the transgender community. Her unwavering commitment in recognizing, saying out loud and describing the power and truths in the intersectionality of her blackness, womanhood and transness have helped promote conversations on LGBTQIA+ equity.

Lead on, Laverne, lead on…

If you want to learn more about Laverne and her inclusive efforts, you can follow her on social media: