Our February celebration of Black History Month was such a powerful and positive experience for the KIT team that we’ve decided to celebrate a different community’s contributions every month this year. We are focused on our mission of disability inclusion and want to amplify disabled voices and take an intersectional approach to this project. The KIT Spotlight feature will be once a month, and a variety of Inclusionistas will share their influences in a blog post. I get to go first for Women’s History Month!

In October of 2016, I got a text message about something work-related from Jeremy, our DC-based Inclusionista.  He added a “P.S.” It said, “I talked to Judith in the hallway today.” I replied, “Judith? Judy Heumann??” He said, “Yes, I got an intro and fan-boyed hard.” We went on for a few messages about how cool it was that Jeremy got to meet and shake hands with living legend Judy Heumann in our office building. 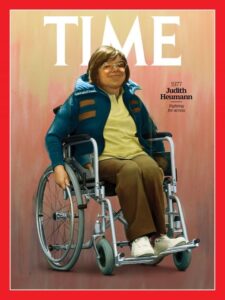 Judy Heumann is a lifelong disability rights activist, and her imprint is on every aspect of life, from education to independent living, to employment, to media, and to philanthropy. Her lived experience of being repeatedly denied access informs her advocacy. As a young child, she couldn’t attend school because her inability to walk deemed her a “fire hazard.” She learned she had to fight for her rights, and then she devoted her life to fighting for the rights of the disability community.

Her advocacy roots were formed at Camp Jened, a camp for kids with disabilities that was the subject of the Netflix documentary Crip Camp, in which she appears. It was at camp that she connected her experience to the broader disability community.

Over the course of her career, she founded several nonprofit organizations, including the World Institute on Disability with fellow pioneer Ed Roberts. She was instrumental in passing major pieces of legislation, including the Individuals with Disabilities Education Act. She may be most famous for leading the 1977 504 sit-in, which at almost a month is the longest sit-in at a federal building. The sit-in was successful as it resulted in Section 504 of the Rehabilitation Act, one of the first civil rights laws that protect individuals with disabilities.

Judy served in both the Clinton and Obama administration, and she was recently a Senior Fellow at the Ford Foundation. Her memoir, Being Heumann: An Unrepentant Memoir of a Disability Rights Activist, is a must-read for a new generation of activists. Or, you could watch the Comedy Central show Drunk History version of the 504-sit in starring actress Ali Stroker as Judy Heumann. Hey, we all learn differently.

Judy Heumann is one of the most important figures in disability history. You’d think this might make her unapproachable, but the opposite is true. I have a once-a-month call with a young nonprofit leader in the DC area, and every time I talk to him, he tells me about his recent chats with Judy. I’ve heard this same thing from other young activists too. She’s a mentor, a guide, and a champion for the next generation of the disability rights movement.

I hope I’ve inspired you to learn more about Judy Heumann this month. You can follow her on Twitter @judithheumann to see how she continues to advance disability inclusion.